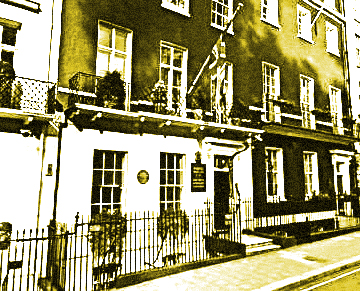 ONE:                     Josiah Du Pre, the 18th century statesman, politician, Director of the East India Company and Governor of Madras, is believed to have had a brother, who was violently insane.  Rumours abound that the poor brother was chained up in a third-floor bedroom of 50 Berkeley Square during his life.  Further rumours maintain that this same pitiful man has been both seen and heard from beyond the grave, since his death in the early 1800’s.

TWO:                    During the 1870’s, many neighbours of number 50 Berkeley Square claimed to have been awoken during the night by screams and noises coming from the house, despite it being completely empty at the time.  Witnesses swore that these incidents included: sounds of furniture being dragged across bare floorboards, windows being raised and lowered by invisible hands, the noise of ringing bells and various objects being thrown out of windows, such as stones and books.  The infamous ‘ghost-hunter’ Harry Price also claimed to have found similar reports during the 1840’s of unnatural noises which became so loud that a brave group of neighbours joined forces and searched the house, but found nothing.

THREE:                 In 1872, Lord Lyttelton (1817–1876) heard of the house being haunted and agreed to spend a night there in the attic room; suitably armed with two blunderbuss guns, loaded with buckshot and silver sixpences.  He claimed to have witnessed an eerie entity – resembling a brown mass with octopus-like tendrils – that leapt at him from the darkness.  Lord Lyttelton fired one of his weapons at the shape, but in the light of morning could find no trace of hitting anything other than furniture and wallpaper.  Despite surviving the night, rumours of supernatural forces spread further in 1876, after Lord Lyttelton committed suicide by throwing himself down a flight of stairs.

Other sources name this individual as the famous author, Sir Edward Bulwer-Lytton (inventor of the phrase, ‘the pen is mightier than the sword’) and place the events firmly in the 1840’s.  Reputedly, the evening’s experience was the inspiration for Sir Edward’s 1859 novel, ‘The House and the Brain’, also known as ‘The Haunted and the Haunters’.

FOUR:                    One of the ghosts belonging to the town house is said to be the spirit of a young Scottish child, who apparently died violently within the nursery.  Tales are told of the frightened spirit walking around the house near the region of the nursery, holding her hands tightly and weeping.

FIVE:                    The ghost of a tragic, young woman is said to haunt the house, her demise happening while escaping the unwelcome, amorous advances of her uncle and falling/jumping to her death from an upper floor of the house.  Some witnesses claimed to have seen her ghost holding on to a window ledge and screeching.

SIX:                      In the 1830’s, (possibly the 1840’s) a man named Benson who owned the house, took money from a gentleman, Sir Robert Warboys, as a form of wager that he could spend a night in the haunted house, ignoring warnings from locals not to mess about with the supernatural.  Sir Robert retired to an upstairs bedroom (thought to be the most haunted room in the house), while some of his friends remained on watch at the ground floor.  At some point during the night, a pistol shot was heard from the upper section of the house.  When the four gentleman reached the room where Sir Robert Warboys was staying they found that he had shot himself through the head.  Other accounts state that the body of Sir Robert was crouched in one corner of the room, ‘lips peeled back from his clenched teeth in a grimace of horror’, dead from fright but his still-smoking pistol aimed at an opposite wall where he had shot at something unknown.

SEVEN:                 A mistier tale comes in the form of another man who bravely agreed to stay the night within the haunted bedroom on the third floor, in the company of his faithful dog.  At first light next morning, both man and his hound were found dead from unknown causes.

EIGHT:                  Sometime in 1850, the house was rented out to a Mr Jarvice, as a place for partying.  The story is that one of his maids went missing, but was eventually located in the infamous haunted third-floor bedroom in a state of having repeated fits.  The poor woman survived for a few hours, but eventually passed away in nearby St. George’s Hospital.  Other accounts mention a similar maid (perhaps the same one?) who witnessed an apparition inside the house and went insane, being duly transported to an asylum from whence she never returned.

NINE:                     In the 1840’s, 50 Berkeley Square was rented out to a newly-married couple.  The story goes that while the honeymooners were out of the country, the mother of the young bride went to the house, in order to prepare it for their return to England.  Eventually, the mother fell fast asleep on the third floor, in the haunted room.  When servants heard two screams emanating from the room, they ran to investigate, only to discover the corpse of the mother laying on the bed, her facial features twisted into an agonising shape.

TEN:                     In the early 1850’s, a gentleman called Captain Raymond (apparently engaged to the daughter of Mr Jarvice from #8) loudly proclaimed to anyone in earshot that the hauntings of number 50 were utter poppycock.  When reminded of the recent events involving the deceased maid, Captain Raymond exploded with indignant rage and informed everyone that he would spend a night in the haunted room.  Before leaving for the night, Raymond informed Mr Jarvice that were he to hear one pull of the bell cord from the bedroom they should stay away, in case he had accidentally pulled or moved it.  However, should there be two rings of the bell from the bedroom then Mr Jarvice was instructed to rush to the room and render immediate aid (against what or whom, or what weapons Jarvice should bring with him to fight the undead is unclear).  The legend states that just after midnight, the bell sounded once, very faintly, just before ringing violently, as if being pulled very hard and repeatedly.  Like the poor maid, Captain Raymond was found on the bed, in the grip of some unknown convulsions.  As with the maid, Captain Raymond subsequently died.

ELEVEN:                The ghost of a very young girl was apparently reported by several people during the 1820’s.  At each sighting of her appearance the house was stated to have been filled with the eerie noise of hysterical sobbing.

TWELVE:               Several visitors to the town house of 50 Berkeley Square gave reports of sighting a horrific male apparition around the building, particularly on the upper floors.  Once again this seems to correspond with the poor brother of Josiah Du Pre, from #1, as the physical descriptions were very similar.

THIRTEEN:             At Christmas, in 1887, two sailors – commonly said to be Edward Blunden and Robert Martin (although occasionally reported under other names) were stuck in London, with no wages and still nearly two weeks left on their shore leave.  Noticing from a sign that 50 Berkeley Square was up for rent, they both decided to escape the cold and spend a night or two in the empty house; selecting a good-sized bedroom on the third floor for their slumbers.  At first they slept well, until the sound of heavy footsteps awoke them.  At the sound of these steps moving up the stairs, both men nervously eyed the door, perhaps wondering if they had been spotted entering the building and the police were about to arrest them.  When the door swung open to reveal nothing physically visible, yet the footsteps continued across the floor (along with odd scraping noises as if something was dragging itself across the wooden boards), both men understandably got out of bed and looked for escape routes.

Here the tale often differs, although the upshot is always the same – poor Edward Blunden was found dead; his neck severely broken.  In some accounts, the sailor died instantly.  In other stories, he was able to breathe a few, final words to a policeman, confirming that an ‘unknown shape’, or a ‘vortex of spiralling energy’ had attacked him (sometimes also reported as a grotesque man, with a hideously-large mouth – presumed by many locals to be the spirit of the insane brother of Josiah Du Pre, back in #1).