While Britain’s towns and cities tend to hog the limelight for paranormal tales, there are a number of much smaller villages that claim to have more G.P.S.M. (ghosts per square metre) than anywhere else in the UK. Over time, many of these locations have claimed/still claim to hold the grand title of ‘Britain’s Most Haunted Village’.  Naturally, this raises a question  – who are the contenders for this title and what are their claims?  We’ll start the journey by exploring a village in Kent named Pluckley. With a population just stretching over 1,000, Pluckley lies just off the M20 motorway, between the towns of Ashford and Maidstone.  At the time of the Domesday Book in 1086, Pluckley was larger than neighbouring Ashford, but over the centuries the village has remained small and largely known for two main reasons.  Firstly, it was the setting for the 1990’s TV series, ‘The Darling Buds of May’ and secondly, it was listed in the 1989 ‘Guinness Book of Records’ as being the most haunted village in the UK, with at least 12 (and possibly as many as 16) separate phantoms. A good place to begin a ghostly tour is usually the pub and Pluckley holds three locations of paranormal interest.  At The Grove, the ‘Dering Arms’ lays claim to a bonnet-wearing lady who has appeared in solid form to several people over the years. Over at the ‘Black Horse’ pub on The Street, customers can find a nostalgic, historical air with ancient, wooden beams and a roaring open fire.  According to locals, the pub also has a mysterious presence that likes to move and hide objects and clothing within the bars – items that seem to dissipate into thin air and magically reappear at a later time.  Staff and customers have also reported regular taps on their shoulders from invisible hands, as well as their clothes being pulled.  In recent years, one example of poltergeist activity was witnessed by over 25 people watching a football match in the pub, when 3 pints of beer all decided to jump off a table at the same time, landing in different places yet all upright without spilling a drop. 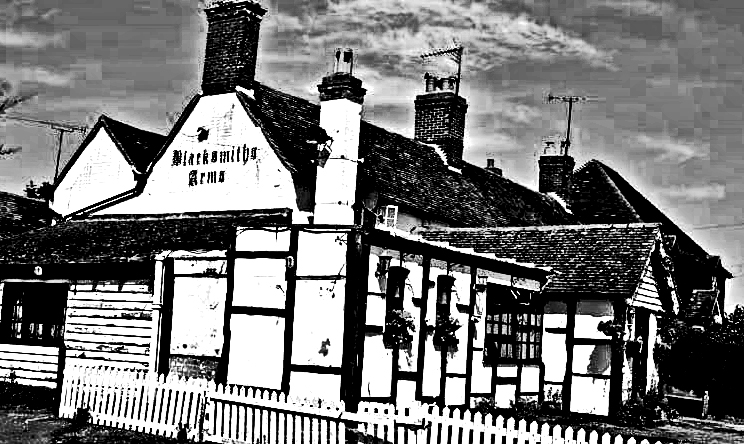 ‘The Blacksmith Arms’ at Pluckley, Kent.

Meanwhile, farther down The Street at number 84, the ‘Blacksmith’s Arms’, makes claims that are equally as grand; a fact that’s perhaps not too surprising upon learning that two former names for this pub have been ‘The Ghost’s Arms’ and ‘The Spectre’s Arms’.  Four separate apparitions are claimed for the pub, including a 17th century, Civil War Cavalier who likes to frequent upstairs, above the bars.  He is apparently joined by an even older ghost of a maid, wearing Tudor attire, the spirit of a young boy and also a man dressed as a coachman who enjoys staring into the fire of the lounge bar.   As recently as the 1990’s, owners of the pub claimed to hear heavy, phantom footsteps upstairs, despite the upper rooms being completely empty.  Around this period, a lady awoke in the middle of the night to find the apparition of a young boy standing at the base of her bed; staring back at her with a blank expression.  As with many haunted locations, family pets seem to be aware of unseen occurrences and here at the pub dogs have refused to venture upstairs, often seen frantically barking at thin air. Opposite the ‘Black Horse’, on Dicky Buss’s Lane (named after a former village miller – more of him later) is the site of a tragic scene, where, just after World War I, a school master took his own life by hanging himself from a tree.  His figure constitutes another of Pluckley’s ghosts; still attired in his favourite coat and striped trousers.  Another ‘hanging ghost’ concerns the apparition of a military Colonel who also took his own life and can still be glimpsed wandering around Park Wood. Meanwhile, at a place called Frith Corner, (subsequently renamed ‘Fright Corner’ by the villagers) the spectre of a former highwayman can be seen, occasionally re-enacting his painful death at the hands of a gang – consisting of either outraged locals, vengeful lawmen or rival outlaws, depending on who is telling the tale.  Regardless of the assailants’ identity, the cause of death involved the highwayman being attached to a tree, via a sword being rammed through his torso. Back within the village, a mysterious coach and horses has been both seen and heard on several occasions by different witnesses, usually around a historical coaching route.  During the 1995 ITV production of ‘Strange But True Encounters’, Michael Aspel interviewed villager Peggy Theobald, who gave a witness account of a spectral coach and horses that she and her husband had seen on returning home in the early hours after babysitting their grandchildren.  According to Peggy, upon approaching Pinnock’s Cross, they were astonished to see a luminous coach and horses approaching their car.  As they watched, the coach and horses faded away into the night, leaving the couple shocked and confused.  Others have claimed to hear the sounds of the coach and horses at various points around the village, particularly on Maltman’s Hill and Station Road. The agonising screams of a dying man can be heard echoing around the site of the old village brickworks, after being crushed by a falling wall.   Over at ‘Greystones’ – a former rectory belonging to St. Nicholas church – the ghost of a monk can be observed, while at the church itself a range of paranormal activity is claimed to occur.  Dating from at least 1090, the church is home to the apparition of Lady Dering (1629-1704) – a prominent musical composer and occupant of Pluckley.  It is assumed that the lady – or ladies – seen within the church relate to Lady Dering, although opinions are divided as to the exact identities, but it seems that one, or several members of the Dering family still like to make appearances.  Several witnesses have reported seeing a lady dressed in white clothing from the 17th century (along with a ‘red lady’ sighted in the churchyard), as well as the sound of a woman’s voice, adding to several tales of knocking noises and odd lights within the ancient church.   Perhaps a separate individual, the image of a lady attired in modern clothing has also been seen at this location, along with the ghost of a dog. Meanwhile, a ghostly Tudor lady wanders Rose Court, a 250 year old house and can still be heard around dawn calling for her beloved dogs.  Over at the large house of Surrenden Dering, another lady from the Dering family was witnessed by several members of the US army stationed there during World War II, with several soldiers refusing to stay there after watching her float through the house.  Accounts also mention a certain Mr Walter who kept vigil at the house one evening to see if he could spot the apparition.  To his horror he was successful, becoming so scared that he emptied his rifle into the lady, merely causing her to vanish. 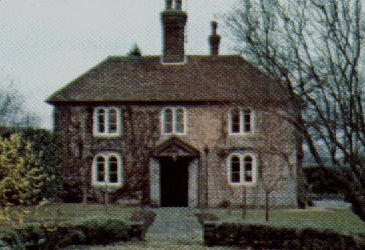 Ashford taxi driver Raymond Breakspear had an unusual encounter in recent years, when he picked up a male passenger approaching Pluckley in the small hours.  The passenger sat in the rear of the cab and Raymond spied him often in the mirror, yet when they reached the village the man had completely disappeared. Elvey Farm, on the edge of the village, is host to a couple of ghosts, including Edward Brett, a former owner, whose chilling voice stating ‘I will do it’ has been heard on occasion – the last words he spoke in life before shooting himself in front of his family.  The apparition of a military man has also been spotted here on the stairs, while over at a ruined windmill by a house called ‘The Pinnocks’, we again run into Dicky Buss, a former village miller – although this time in spectral form. At Pinnock Bridge, the apparition of a gypsy woman – and former watercress seller for the village – has been sighted on many occasions; apparently the victim of a devastating accident when she set herself alight, yet whose misty form can still be glimpsed. It’s clear that paranormal tales abound in Pluckley, although it also appears that not everyone is in agreement, or even happy about this fact.  Many accounts from locals seem to dismiss the tales as over exaggerated, or simply not true, which may be due to some villagers’ intentions to play down Pluckley’s paranormal tag to keep out tourists and ‘ghost hunters’.  During the 1990’s, the vicar of St. Nicholas church, Michael Hicks, dismissed the paranormal claims as nonsense, stating that ‘there are no ghosts in Pluckley…only the Holy Ghost’.  In a similar vein, it’s not uncommon to find similar views on current social media, with some claiming that the village is over-rated regarding its paranormal claims. One gentleman who might disagree is Craig Twyman, a paranormal investigator who recently investigated Pluckley.  I asked him about the village and he told me of two recent sightings he had personally witnessed.  Firstly, Craig caught a glimpse of a tall, young male standing in a telephone box, dressed in what appeared to be a leather biker’s jacket and jeans.  Secondly, while investigating the churchyard, Craig took several photographs.  In one of them, taken at the rear corner of the churchyard, he appears to have captured an unusual mist around the gravestones.  Being sceptical, Craig checked his other photos and took several others but could not find, or replicate, the effects. While some may continue to express doubt and cynicism towards the collection of Pluckley ghosts, for those individuals who have had personal experiences, the village certainly holds something far deeper than historical, rustic charm. We Venture After Dark into Maidstone Museum’s : Museum Lates: Chiller! 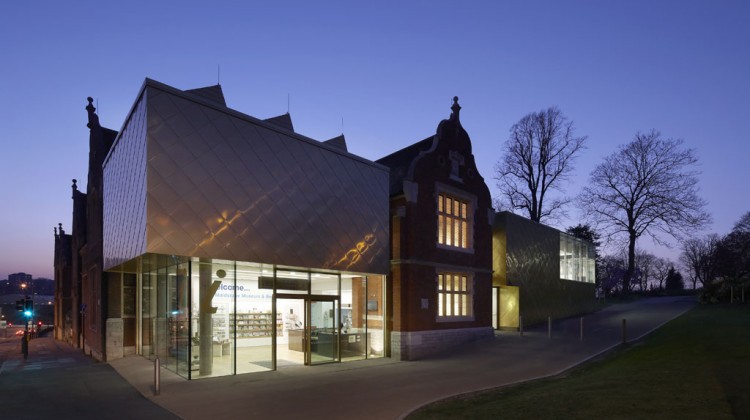