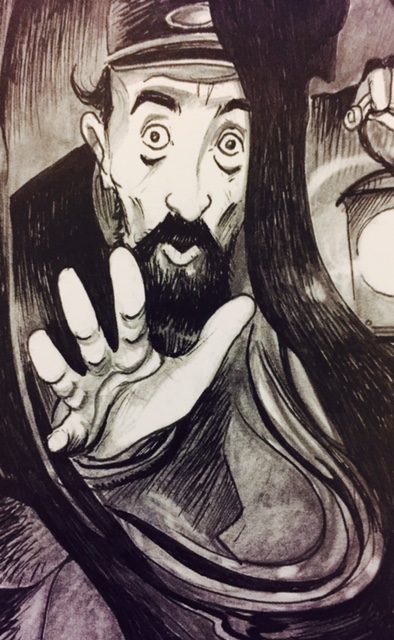 There’s surely no better time for a ghost story than amidst the cold nights and warm fires at Christmas. So we were hugely interested to find out about David Hitchcock’s latest graphic novel, an adaptation of Dicken’s classic supernatural tale ‘The Signalman’ first published in 1866 out now on Black Boar Press. The story itself adapted to the comic form by his colleague Jason Cobley, and brought to life in illustration form by David’s skills. We’ve been fans of David’s work for a while after first being introduced to his skilled artwork from the exquisite illustrations within the pages of his book ‘Spring Heeled Jack’ on Titan. An enjoyable Victorian escapade amidst the smoke stacks of London which gave a unique perspective on the London myth of the leaping fiend. Having seen David tackle such a legendary cryptid such as SHJ we were very keen indeed to see David’s and Jason’s take on such a beloved ghost story. Charles Dickens classic tale of a supernatural encounter on a particularly lonesome railway spot is a legendary tale, inspired of course by the horrific Staplehurst crash which Dickens survived in 1865.  The terrible incident’s aftermath is said to have haunted him for the remainder of his days and from the story of the Signalman it’s always been evident just how much it affected the writer. The tale was given a new lease of life to many when it was adapted for television in 1976 as part of their ‘Ghost stories for Christmas ‘ TV series, deemed a cheaper option to adapt than another M R James story.

As big fans of the original story and of the 70s version we were particularly interested to see how the story would perform in graphic novel format. Especially after having a chance to check out the other major supernatural comic this year ‘Ghost Stories of an Antiquary’…

The answer we’re pleased to say is very well!

David’s detailed artwork really does do the classic story justice, with heavy shadows ever encroaching on the protagonists and subsequently a creeping feeling of dread ever present. The feeling of torment by an unknown (possibly otherworldly) presence on the poor signalman in question is really emphasised quite fantastically and the pacing of the panelling works very well in setting up the horror around the tunnel he works at. The story also never feels heavily edited and works very well as a short graphic novel.

The supernatural encounters are also well depicted, always holding a little back from the reader adding to the tension. It’s something often overlooked in supernatural comics but holds it’s own very well here.

It should be said we particularly liked the comic’s unique sizing – larger than most traditional graphics novels/comics coming in at just over A4.  We enjoyed this difference in size and it really allows the reader to soak up the panel work in larger format. If anything the sizing is somewhat reminiscent of a classic sticker album which really can only add to the nostalgia value. If you’re new to the Dickens original you’ll love this, and if you’re a seasoned fan of the ghost story prepare for a whole new take on undoubtedly one of the bleakest ghost stories written. It’s a must read.

Next post We Check out Peveril Publishings' Peter Cushing's Scrapbook